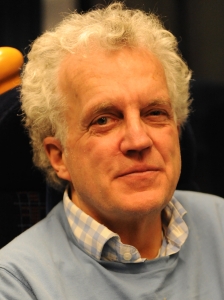 Christian Wolmar: He’d get the trains to run on time. (Willwal)

For the unpurged time is running out to vote in the various Labour Party elections. Tomorrow at 12 noon the ballots will close. We will then have to wait until 11:30 a.m. on Saturday to discover whether Jeremy Corbyn really is destined to be the next leader of Her Majesty’s Most Loyal Opposition. By then, however, we will already know the outcome of the key contest, which most of the privileged few (hundred thousand) cannot take part in.

Yes, the leadership race is important, but mainly for the vague hope that, a few years after his (probably) doomed tenure is cut short, Jeremy Corbyn will end up a Tory-baiting work and pensions secretary. And while the election for deputy leader features a more inspiring cast, it is worth remembering that only one previous incumbent has gone on to be prime minister, and only two others have become party leaders (one, in fact, of another party).

On the other hand, the competition to be Labour’s London mayoral candidate offers far more reasons to be cheerful. Firstly, of course, it leads to an actual election next year, as opposed to in 2020, and one, moreover, that Labour ought to win; though the likely Tory contender, Zac Goldsmith, will probably prove more plausibly electable than his father, who luckily cannot sue from beyond the grave. Secondly, the ballot includes a candidate whose desire to become mayor of London lies in exercising the particular powers of that office, rather than in seeking a consolation prize after being deprived of a cabinet post by the voters.

Journalist Christian Wolmar began his campaign a couple of years ago, after becoming frustrated during the 2012 contest (which he covered) by the lack of vision and ‘hackneyed’ approach shown by Ken Livingstone and Alexander Boris de Pfeffel Johnson (who, for some reason, has decided to omit all but the Boris of his forenames on recent ballot papers).

Not only does Christian Tage Forter Wolmar have a full name every bit as exotic as the incumbent, but he also has an interest and expertise in the key element of the mayoralty that the current (part-time) office-holder lacked prior to his election, and has not bothered to acquire in the seven years since.

A former transport correspondent for the Independent, and an author for four decades, Wolmar has specialised in railway history and transport policy, writing perhaps the definitive account of the private-public partnership on the London Underground. He has also reported on housing, child abuse and local government, and in the final week of the mayoral campaign he has brought his journalistic nous to bear again, with a detailed analysis of how Boris Johnson has squandered £600 million of public money on vanity projects; a charge sheet that doesn’t even mention those obsolete water cannons (since the £218,205 spent on them is, to Johnson, mere ‘chicken feed’).

His long run-up has allowed Wolmar to give serious consideration to the kinds of policies the next mayor could actually enact. Before the other Labour candidates had bothered to start campaigning, Wolmar had developed full strategies on transport, housing, policing, health and food security, which his rivals have since happily raided, filching ideas such as one-hour bus tickets, pedestrianising Oxford Street and scrapping the ludicrous ‘Garden Bridge’ for their own manifestos. But while Diane Abbott, Tessa Jowell, Sadiq Khan, David Lammy and Gareth Thomas have relied on an existing party machine, or accepting donations from property developers, to run their bids, Wolmar only made it on to the shortlist after a crowdfunding campaign and a diligent tour of the London Constituency Labour Parties.

This, naturally, has led to him being largely ignored by the capital’s media, to the extent that LBC excluded him from its hustings, initially claiming a lack of microphones. Yet past mayoral elections (and not just those in London) have shown that independent-minded candidates – ideally barely considered politicians at all – outperform more conventional choices, like, say, the ex-ministers most likely to get the Labour nomination.

None of which is to suggest that Wolmar’s rivals are unimpressive. Sadiq Khan did a fine job running Labour’s general election campaign in London (the only real success in May) but, having waited to see how the national vote would play out before switching his attention to the mayoralty, he launched his campaign without mentioning any policies at all. And despite claiming to be the housing specialist his proposals in that area have been vague, whereas Wolmar’s more detailed suggestions are based on the practical powers the mayor already has. Meanwhile, Tessa Jowell, as a former minister for London, certainly brings experience, but aside from the potential political poison of her support for Heathrow expansion, and the travails of her husband, her priorities have been brought into question by her links to Tim Bell’s Chime Specialist, a lobbying company which supports the Garden Bridge and favours demolishing Crystal Palace sports centre, a move which Jowell claims to oppose.

If the Labour Party were serious about rejecting the ‘same old politics’, the ‘Westminster bubble’, or whatever other political malaise Jeremy Corbyn has come to deliver us from, Wolmar would be the frontrunner. For he is that rare thing in politics: someone who actually knows what he’s talking about, having talked about it for his entire career as a journalist.

A vote for the great bearded Corbyn would be a brief thrill, repented at leisure; or, the first step to transforming Britain into a nation ready to embrace socialism, depending on your point of view. But Labour Party members in the capital have an opportunity to do something really radical, by selecting a non-career politician (as opposed to a pretend one like Johnson) who has kept his campaign free from funding by vested interests, is a bona fide expert, and whose ambition for the mayoralty is about what he can do for London, not the prestige the post might bring to him after the fizzling out of ministerial aspirations.

The clock is ticking, but there is still time to move Christian Wolmar an unlikely step (or cycle lane – there’ll be a lot more of those) nearer to City Hall.

3 thoughts on “Why Christian can convert London”