A selection of the writing, wittering and viewing that has caught our attention over the past week.

► There have been some impressive displays of dismissive contempt this week. Nick Cohen was in fine form on the Spectator website, ripping into the chancellor:

George Osborne’s dismal achievement has been to destroy the ideals of his supporters, while confirming all the old prejudices of his opponents – and adding some new ones of his own.
Enough has been written on the awful circumstances in which Osborne will leave working families on low incomes. The hypocrisy of his pretence of being the workers’ friend is on such a Himalayan scale it may yet scupper his ambition to be prime minister.

► Meanwhile Simon Jenkins ripped into the airport-expansion lobby on Tuesday in the London Evening Standard, demolishing the claim that we ‘need’ more airport capacity.

Air travel is overwhelmingly leisure travel, a modern luxury that needs no subsidy nor deserves planning privilege… Nor is being ‘a European hub’ essential to London. It is just profitable to airports.

► And, plagued by post-performance harangues about Syrian refugees from Benedict ‘Hamlet’ Cumberbatch, James Delingpole in the Spectator asked whether there is anything that luvvies do not know:

Well I can answer that. No there isn’t. I’ve learned from the newspapers, from the TV and social media that there’s not a single problem in the world, great or small, for which the luvvies don’t have the definitive answer.

► The leader of the Scottish Tories, on the other hand, was doing her best to be optimistic and progressive. Ruth Davidson used the Conservative Home site to hail the revival of the Conservative Trade Unionists organisation. Did you know that ‘Margaret Thatcher held her first political office within Conservative Trade Unionists (CTU) and went on to create 250 CTU branches across the country while Prime Minister in the 1980s’? We didn’t. Davidson, a former trade union member herself, added:

We must not fear, ridicule or ignore trade unions. Rather, we must recognise that they are home to thousands of Conservatives and a means to advance Conservative values.

► The death of actor Warren Mitchell inevitably prompted pieces about his portrayal of Alf Garnett in Till Death Us Do Part and its successors. Round these parts, however, he is most venerated for his magnificent guest appearance in the Hancock’s Half Hour episode ‘The Poetry Society’, in which he played – somewhat against type – a lisping avant-garde aesthete named Gregory, leader of the East Cheam Cultural Progressive Society (the ECCPS, or Ecc-pers, as they’re known locally). This is his poem ‘Tin Can’:

► That show (surely one of the high points of western civilisation) was recorded in London in 1959. To accompany it, here are some fine photos of London in the 1950s, via the great Flashbak.com: 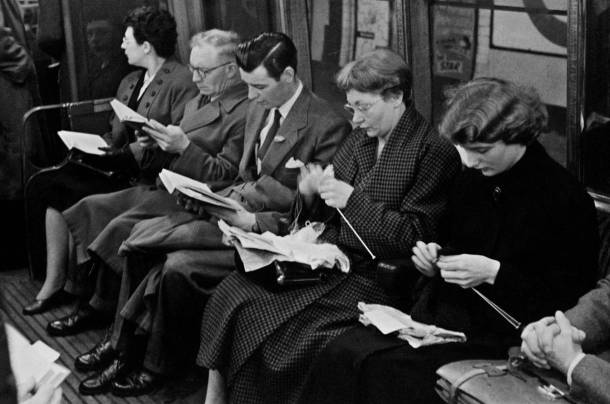 Commuters on the London Underground in 1955. (Frank Horvat)

► And finally, the most striking early comment on the mass murders in Paris on Friday comes (almost inevitably) from Nick Cohen. Finely judged, truthful and chilling:

… until Friday night, Europe’s response to terrorism has not been extreme. Despite gruesome predictions to the contrary, European democracies have not turned themselves into police states. There have been no backlashes or pogroms against Muslims …