There’s nothing special about Boundaries Road in Balham, South London: just a typical suburban street of bow-windowed two-storey houses – the kind that now cost the thick end of a king’s ransom to purchase. But there’s history here, dark history. A savage crime committed on this street led indirectly to the oddest literary trial of the mid-1950s.

At the time, one of these unprepossessing houses was occupied by Charlotte and Herman Schreiber, together with Charlotte’s little daughter from a previous marriage, Miriam Susan Gray, and three lodgers. It was around one o’clock in the morning of 15 August 1953 – Charlotte was later to report – that she heard some noises from the room below, but she wasn’t sufficiently disturbed to get up to investigate. It wasn’t until 6.30 am that she went downstairs, only to find the ground floor filled with smoke and her five-year-old daughter dead in bed.

It wasn’t immediately clear what had happened, save that there had been foul play. Suspicion fell on one of the lodgers, a 24-year-old furnace-man named John Wilkinson. And on interrogation, according to the police, he gave a full statement, in which he admitted that he had killed the child.

He said he’d been drinking that night – a bottle of vermouth and a bottle of beer – though he insisted he wasn’t actually drunk. What possessed him, he couldn’t say, but he had broken the leg off a chair and gone downstairs to the nursery where Miriam slept, where he had assaulted her. ‘The little girl began to toss and turn,’ he was alleged to have said. ‘I struck her on the head with the chair leg. I could not stop myself hitting her. I put my hands round her neck and squeezed.’

In a state of panic, he had then attempted to cover his tracks by burning the house down but, though he set the kitchen alight, his stratagem had been unsuccessful.

In court, Wilkinson disowned this statement and instead pleaded not guilty on grounds of insanity. No one was much inclined to believe him, for public feelings were running high. The horror of the crime was amplified by the fact that Miriam – nicknamed Little Sunshine – was a pretty girl with blonde curls, pretty enough to have worked as a child model, which meant there was no shortage of photographs to run in the papers.

Worse still, evidence subsequently emerged that Wilkinson had sexually assaulted her after he had bludgeoned her. So evil were the details of his offences, as revealed at his trial, that several national newspapers simply stopped reporting the proceedings. Nonetheless, crowds of a hundred or more women gathered outside the courtroom each day to shout abuse as he came and went from the hearings.

He was found guilty, sentenced to death and, following the rejection of an appeal, was hanged on 18 December 1953.

What could have driven Wilkinson to commit such an awful crime? The answer perhaps was to be found in his reading matter as he sat alone drinking that night. When the police searched his room, they found a collection of magazines including copies of a short-lived publication titled Bedside Clubman. ‘Glamour – Cartoons – Fiction – Satire – Humour’ it promised on the cover, but everyone knew that the first of those was the only element that really mattered: people like Wilkinson didn’t spend five shillings on such magazines because they wanted to read the contributions of John Steinbeck or Georges Mikes; they just wanted to leer at the airbrushed photographs of young women flaunting their bodies.

Similarly, amongst the books in Wilkinson’s room was the novel Vengeance (1953) by Hank Janson. And that was considered very newsworthy, because Hank Janson was one of the most notorious writers in the country. Magistrates the length and breadth of the country had already issued hundreds of destruction orders in response to police seizures of his work. But no matter how many copies were destroyed, they kept on coming: there were up to a dozen new Janson titles a year and his publishers boasted that eight million books had been sold.

What kind of books were they? Well, a decade earlier, George Orwell had seen James Hadley Chase’s No Orchids for Miss Blandish (1939) as representing a new tone in ‘lowbrow fiction’ where there was no longer ‘a sharp distinction between right and wrong and between legality and illegality’. A hardboiled story set in an American underworld where the cops win only because they’re even more ruthless than the criminals, No Orchids – according to Orwell – was not quite pornography, but only because: ‘Unlike most books that deal in sexual sadism, it lays the emphasis on the cruelty and not on the pleasure.’

Janson took Chase’s formula and drove it further downmarket in a series of novels that featured ever more treacherous dames, ever more brutal hoods, with the action centred on a character who was also named Hank Janson – for these were presented as real life experiences.

The cover of Vengeance, by artist Reginald Heade, was characteristic of the style. A heavily made-up blonde is wearing a strapless, figure-hugging, cleavage-revealing dress. She’s looking directly at the viewer, oozing seduction and submission, as she leans back in a leather chair with both arms raised, her wrists meeting above her head. In this instance her wrists aren’t tied together – as they are, for example, with the almost identical blonde on the cover of Sister, Don’t Hate Me (1951) – but that’s very much the implication that’s being conveyed in an atmosphere suffused with sex, violence and crime. In this genre, Orwell wrote, it was not a case of ‘escaping from dull reality into an imaginary world of action’, more a retreat into ‘cruelty and sexual perversion’.

And that’s why these books were consumed in such great numbers with such great enthusiasm by young working-class men – men such as John Wilkinson – and by adolescent boys. The interest shown by the latter, of course, provoked moralistic concerns about the corruption of the next generation. When booksellers were charged with selling Janson’s books on the Isle of Man, the prosecutor argued that these were the sort of books liable to ‘fall into the hands of young people on vacation’.

Worse than that, the youth appeal was across classes. ‘The titles alone drive my blood wild,’ remembered the privately educated playwright Simon Gray (born 1936). ‘I really went through the most astonishing tumble of emotions, the confusion of desire and thrilled shame.’ Schoolboys couldn’t get enough of them. Apart from anything else, they were cheap: Vengeance was a paperback retailing at just two shillings.

The Little Sunshine murder brought hostile attention to Janson’s books in the national press, and society’s retribution was swift. Within weeks of Wilkinson’s execution, Janson’s publishers were in the dock at the Old Bailey, being charged and found guilty – along with three companies they owned – of printing and publishing obscene material, namely seven Hank Janson novels: Accused, Auction, Persian Pride, Pursuit, Amok, Killer and, inevitably, Vengeance. 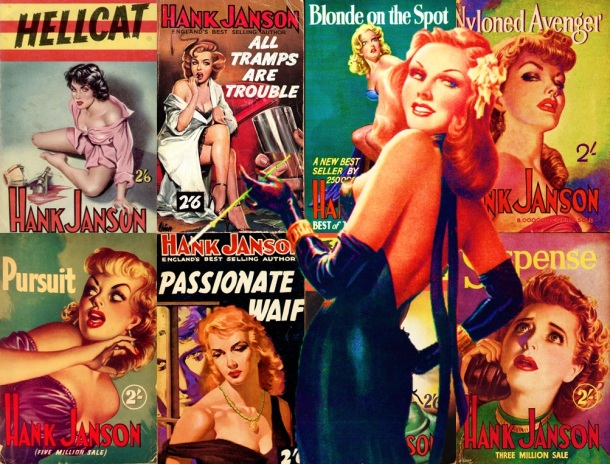 Unlike the previous, low-key prosecutions in magistrates’ courts, Scotland Yard’s Vice Squad was involved this time, and the case wasn’t going to end up simply with a destruction order. The publishers – Reg Carter, 34, and Julius Reiter, 46 – were each fined a thousand pounds and given six-months jail sentences, while their companies were fined two thousand pounds apiece.

‘This is literary pollution,’ the recorder, Sir Gerald Dodson, told the two men. ‘It has been said that an obscene publication is to be judged in the light of modern standards. I profoundly disagree.’ He concluded: ‘One can only hope that this trial will mean a sweep in the other direction – towards the realm of pure and exhilarating literature and away from this kind of debasing stuff which, sooner or later, will drag the whole reading public down into a veritable pool of depravity.’

As for Hank Janson himself, he too would have been prosecuted, save for the fact that he had temporarily evaded the Yard. But there was a warrant out for his arrest, should he return to Britain from Spain, where he had made his home.

Because, to the surprise of many of his adolescent fans, Janson turned out not to be the hard-drinking Yankee tough-guy hero of his novels. Rather he was an Englishman, a 36-year-old named Stephen Daniel Frances, who was born in poverty in south London, within shooting range of Balham itself. He’d never been anywhere near America. It was, he later explained, a fantasy rather than a location: ‘a far country and a place where almost anything could happen.’

Towards the end of 1954, he did indeed return home and he was duly arrested and charged with publishing seven obscene books, the same seven titles that had seen Carter and Reiter sentenced. When Frances appeared at the Old Bailey in February 1955, however, there was a very different outcome: the judge intervened – after four days of evidence – to bring the trial to a halt, formally declaring the defendant Not Guilty.

Because it turned out that Frances had the perfect defence: he wasn’t actually Hank Janson at all. He had been once, but he wasn’t now.

He was the man who created both the character and the nom de plume, and who had written the first twenty-five novels, but then he had sold out his entire interest, lock, stock and barrel, to his publishers for four thousand pounds. They had since employed other writers to continue the series, but that was nothing to do with him. And since the allegedly obscene articles in this case were all recent publications, they simply weren’t his responsibility.

It was all a bizarre case of mistaken identity, and the proceedings collapsed in great embarrassment for the Crown.

As is customary in such cases, the publicity that the two trials attracted did no harm to sales. Hank Janson remained a lucrative franchise, and subsequent titles appeared with even greater frequency: more than 150 further novels were published before the series finally ground to a halt in the late 1960s.

Stephen Frances, meanwhile, returned to Spain, to play chess and to create another hardboiled hero. This new character, John Gail, made his debut in 1965 with This Woman Is Death (recycling the title of a 1948 Janson book) and appeared in another half-dozen or so novels, but he failed to attract the sales figures enjoyed by Hank Janson.

And all the time, Frances could never quite forget the charges that had erroneously been brought against him: ‘Although the case was nearly twenty years ago,’ it was reported at the start of the 1970s, ‘he still smarts under the result.’ At the time, he was touting a non-fiction manuscript titled The Obscenity of Hank Janson. That book was never published, though in The Trials of Hank Janson (2005), Steve Holland combined a biography of Frances with the story of the prosecutions of the mid-1950s.

Frances died in 1989, thirty-five years on from his Old Bailey appearance, having never recaptured the wild success of his early years.

There are a couple of footnotes to the story. For those with an interest in obscenity trials, it’s worth noting that the prosecuting counsel who came a cropper in the Stephen Frances case was Mervyn Griffith-Jones; a few years later he was to become famous in the 1960 trial of Lady Chatterley’s Lover, asking whether it was the kind of book the jury would let their wives or servants read.

More significantly, the trial of the publishers led ultimately to the passing of the 1959 Obscene Publications Act.