Obviously the big loser in the general election was Theresa May’s political reputation. Previously seen as dull but competent, she blew the latter half of that clean out the water. Her premiership thus far brings to mind the words of Alan Partridge: ‘People forget that on the Titanic’s maiden voyage, there were over a thousand miles of uneventful, very pleasurable cruising, before it hit the iceberg.’

But who were the other winners and losers?

The great advantage of the first-past-the-post system is meant to be that it delivers stable government. Yet for the second time in three elections, we have a hung parliament. The two main parties got over 80 per cent of the vote between them, but still neither could secure a majority. If we’re going to have coalitions, we might as well have them under some form of PR – at present, the DUP’s 0.9 per cent of the national vote is securing them a ludicrously disproportionate influence.

Over the years, the BBC have had their moments on election-night broadcasts – Paul Saffer has documented the best of them – but the Hereditary Dimbleby and the gimmicky graphics are looking awfully tired. Not to say downright annoying.

Over on the other side, however, ITV had snaffled the best double-act seen in political punditry for many years. Ed Balls and George Osborne are intelligent, articulate and experienced surveyors of the scene, who are now out of Parliament and who don’t agree with their respective leaders. So they can speak freely. And they did precisely that, Osborne being particularly harsh on the Tory campaign. They were superb.

We know that Clegg and Robertson have attracted many detractors and irritated large numbers of people, but both were decent, courteous figures who tried to raise the standard of political debate at a time when standards have not been noticeably elevated. They also had a thoughtful pro-European contribution to make. Nonetheless, both lost their seats. Their presence will be missed.

The Tory assault on the SNP – which allowed some Labour candidates to win seats – was so effective that the idea of a second independence referendum has been quietly shelved. Ruth Davidson played a blinder and was the one unqualified success of the entire campaign.

The position in Northern Ireland, of course, is less clear.

We have a lot of time for Diane Abbott. Today is the thirtieth anniversary of the historic breakthrough when she, Bernie Grant, Paul Boateng and Keith Vaz were elected for the first time, and she has mostly been a force for good over those years.

But she had a catastrophic campaign this time. She wasn’t trapped by trick questions, she just didn’t cut the mustard. At her worst, she simply didn’t have the bullet-point headlines of the policy she was supposed to be launching. As shadow spokesperson for public health under Ed Miliband, she was fine – as shadow home secretary, she floundered.

In a shadow cabinet denuded of stars by the post-referendum rebellion, Thornberry and Starmer have been the exceptions: non-Corbynites who saw their duty as lying with the party not their personal predilections. Both are serious politicians and their loyalty to the cause during the dark days will only enhance their standing.

What a short, strange trip it’s been. Twenty-three years on from the foundation of UKIP by Alan Sked, the party passed peacefully away on Thursday night. They are then, by any normal definition, losers.

But then, by any normal standards, UKIP has always been a failure as a party. Over the course of seven general elections, it won just one seat on one occasion, while its only-ever leader in Westminster was Baron Pearson of Rannoch, who briefly kept the seat warm between Nigel Farage’s first and second incumbencies. Its leading figures included unimpressive rejects from other parties, from Robert Kilroy-Silk and Douglas Carswell to Neil and Christine Hamilton, and its members never quite lived down David Cameron’s description of them as ‘fruitcakes, loonies and closet racists’.

And yet it succeeded in changing the direction of the country in a way undreamed of by, say, the coalition of the Conservatives and Liberal Democrats. Without UKIP, and specifically without Farage, there would be no Brexit, and British – European – politics would be very different. Few will mourn the party’s passing (save perhaps the person who books guests on Question Time and will have to do a little more work in future), but its place in history is secure.

On his third outing as a parliamentary candidate, Lord Buckethead saw his vote increase by over 100 per cent, from 107 votes in 1992 to 249 this time. And in an era of social media, he found his message reaching a wider audience than ever. Next time round, the country may find itself won over by his slogan: ‘Strong, not entirely stable, leadership.’

The Lib Dems emerged with a gain of just four seats while seeing a slight decline in their vote-share. It wasn’t meant to be like this. As the only significant party to oppose Brexit, they really should have done better. Tim Farron’s task was difficult, but that comes with the territory, and it’s hard not to conclude that he let the side down: he simply hasn’t made a national impact. Indeed, even in his own constituency there was an 8.4 per cent swing against him to the Tories. 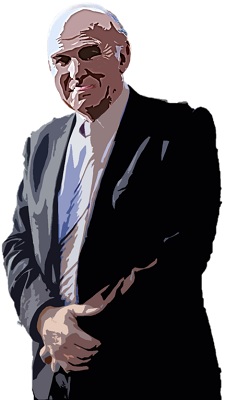 To compound Tim Farron’s problems, there are now potential rivals for his job. Jo Swinson is back in the Commons, and so too is Vince Cable. The latter is particularly welcome: as we all remember, he once compared Gordon Brown to Mr Bean, which was enough to win him a reputation as a parliamentary wit. Admittedly he’s 74 years old now – eight years older than Menzies ‘Ming’ Campbell was when he was the leader – but he gives no impression that his ambitions have died in his soul.

If Jeremy Corbyn stands for anything, it’s a deep dislike of Tony Blair’s New Labour. And if Corbyn achieved anything on Thursday, it was to bury the lingering left-overs of Blair’s legacy. Old Labour is now firmly back in the saddle: they are the masters at the moment and will be for some considerable time.

The scale of the victory can be seen in how peripheral the once-mighty Blairite Titans now seem. Alastair Campbell and Baron Mandelson of Foy have both been in evidence since the election, and both have looked diminished figures. Of Blair himself, there has been no sign.

Oh, and Thatcherism didn’t come out too well either.

‘Strengthen my hand for Brexit negotiations,’ Theresa May urged the British electorate. And they replied by weakening it. Joy in Brussels was unconfined, though the Eurocrats did at least have the decency not to laugh in public.

If May’s reputation was the biggest loser of this election, then the EU27 are the winners di tutti winners (if you’ll pardon our French).

2 thoughts on “Election heroes and villains”