In tribute to Jack Good, who died on 24 September 2017, we publish here an extract from Alwyn Turner’s book Halfway to Paradise (V&A Publications, 2008) on Good’s early television work.

Intended to run for just six weeks in 1957, Six-Five Special actually lasted two years and, under its co-producer, Jack Good, it changed the nature of pop television entirely.

An Oxford graduate who had turned to acting, and had even appeared as a stand-up comedian at the legendary Windmill Theatre, Good had recently joined the BBC as a trainee television producer. Crucially, he was already a convert to the cause of rock and roll, having attended a screening of Rock Around the Clock: ‘I was totally bowled over by the simple display of animal force and energy – and I loved it,’ he said, impressed not so much by the music as by the audience reaction, which he felt had all the vigour and passion that was lacking in modern theatre.

Good ‘was the first pop intellectual’, noted rock commentator Nik Cohn, and certainly he was the first person with a toehold in the establishment to embrace rock and roll, to see it as more than a passing gimmick.

When he persuaded the BBC to make a youth show, he determined to recreate that sense of excitement he had felt on seeing Bill Haley’s film. In particular, he took the revolutionary step of placing the audience between the camera and the performer, so that they could be seen dancing to the music of the live bands. And he refused to patronize his viewers by pretending that a television programme was somehow an objective observation of an event; instead he admitted frankly that this was a constructed experience: ‘Who gives a damn if a camera comes into shot?’, he asked rhetorically.

He didn’t, however, have things all his own way. His co-producer on the series was Josephine Douglas, who had much more traditional ideas: ‘Jo wanted film excerpts on mountaineering – hobbies-for-the-youngsters kind of a programme; I wanted all music.’ His solution was elegant: he invited Douglas to present the show, along with disc jockey Pete Murray, thereby ensuring her absence from the control box.

And, although Six-Five Special did emerge as a magazine show, with sports features and with resident comedians Mike and Bernie Winters, it was the music that caught the popular imagination. Amongst those who benefited most from the programme were Tommy Steele and Lonnie Donegan, while Marty Wilde, Jim Dale and Vince Eager got their first break here.

For a while Six-Five Special was an unmissable event – it was even reported that street gangs in Liverpool changed their meeting time on Saturdays from seven to seven-thirty so that they could catch it – but, as the novelty of its existence wore off, the restrictions of the format began to grate.

‘It may be argued that the show set out to be a teenagers’ programme, and has never claimed to be essentially an all-music show,’ wrote one of the NME’s correspondents in January 1958. ‘But it is my belief that a majority of viewers are interested solely for its music content, and all else is just so much ballast. By all means, have the occasional relevant interview, but some of the comedy is a little trying.’ By then a new co-producer had been appointed in the shape of Dennis Main Wilson, a man who was probably the greatest producer of broadcast comedy ever (The Goons, Hancock’s Half Hour, Sykes), but who had little to contribute on the music front.

Although the audiences were still impressive (up to 12 million at its peak), there was too much of a sense of compromise. An outside broadcast in November 1957 came from the 2 I’s coffee-bar, which had some cultural point, but which also included for no obvious reason an appearance by Gilbert Harding, television’s first grumpy old man. Harding was later to re-enact the broadcast in the film of Expresso Bongo, where he insisted: ‘Teenagers are regarded by the corporation with the deepest reverence.’ This might have explained the limitations of the show.

The first to realize that the series was becoming stale was Jack Good himself, who jumped ship and defected to ITV, where, unfettered by anyone else at all – or so it seemed – he created his masterpiece, Oh Boy!

Indulging his theatrical tendencies, Oh Boy! featured fabulously dramatic lighting, stylized stagings and nothing but rock and roll. There was no room here for the jazz and skiffle that had been part of Six-Five Special, just a half-hour show comprising a virtually seamless sequence of songs, for Good proved to have an unrivalled ear for mixing material.

Coming live from the Hackney Empire, the audience was this time not seen on screen, although their screams could be heard at strategic moments and were apparently even more powerful in the flesh. ‘They just continued screaming in ecstasy from the beginning to the end of the song,’ remembered Engelbert Humperdinck, who appeared on the show under his earlier name of Gerry Dorsey. ‘There was such a din, I doubt that they could have heard a single note I sang.’

In any event there would have been little room on screen for the audience, for the stage behind the stars was already filled with the house-band (Lord Rockingham’s XI), male backing vocalists (the Dallas Boys), and the massed ranks of the Vernons Girls. This latter outfit had been specially created by Good out of what had been the Voices of Vernons, a vocal group recruited from the employees of the pools company in Liverpool; he saw them, decided they were all wrong (‘lumbering women squeezed into tight, gold lamé dresses, chortling musical comedy numbers’, he shuddered; ‘the result was nauseating’), and reinvented them as a team of younger women. Two of them, Joyce Baker and Vicki Haseman, were later to marry Marty Wilde and Joe Brown respectively.

Oh Boy! was a show that, in the words of sometime Old Grey Whistle Test presenter Bob Harris, was ‘raw and fabulously exciting’. It revolutionized the look not only of rock but of television more widely for, as George Melly pointed out, Good’s influence became ever more apparent in the subsequent decade: ‘he virtually invented the pop style.’

It was also a show on which Good’s word was law, especially when it came to selecting material. Marty Wilde was the intended star of the series, but when Good heard ‘Misery’s Child’, the follow-up to ‘Endless Sleep’, and agreed with the singer that it was indeed a stinker, he simply refused to allow it to be performed. In a huff, and picking a fight that he couldn’t possibly win, Larry Parnes withdrew Wilde from the show, thereby ceding the field to the new kid on the block, Cliff Richard.

Cliff was already heavily indebted to Good. When an EMI plugger played the first single to Good, it was he who insisted that the sides be flipped, so that the mundane ‘Schoolboy Crush’ was relegated to the B-side and ‘Move It’ promoted to be the featured track. He then schooled Cliff intensely in the arts of television performance, getting him to shave off his sideburns and abandon his guitar, so that he didn’t come over as a simple Elvis-impersonator, and running him through his act again and again.

‘Before he went in front of the cameras we rehearsed every move, every blink, every twitch,’ he said later. ‘Cliff Richard in Oh Boy! was just a figment of the imagination which this shy youngster from Cheshunt brought to life before millions of viewers.’

The act they concocted proved satisfactorily controversial. ‘Is this boy too sexy for television?’, demanded the Daily Mirror, and even the NME waded in: ‘crude exhibitionism’, it concluded, ‘revolting – hardly the kind of performance any parent would wish their children to witness’. Asked to comment, Cliff shrugged off the criticism: ‘It doesn’t worry me when someone writes his opinion. But why did he have to choose that one show as being different from any other? After all, I’m always sexy!’

The first Oh Boy! went out in September 1958 in a head-to-head scheduling clash with Six-Five Special. The BBC show now had a new producer, Russell Turner, who promised that a revamp would make the series ‘bigger, noisier, brighter and brasher’.

The line-up on that critical Saturday, however, didn’t look particularly spectacular – the likes of Ronnie Aldrich and the Squadronaires, Ronnie Keene and his Cha-Cha Band, Bernard Bresslaw and Russ Hamilton – compared to Oh Boy!, with Marty Wilde, Cliff Richard and the John Barry Seven. And Jack Good.

Within a couple of months it was clear to everyone concerned that Six-Five Special was a busted flush, and by the end of the year it had been cancelled. 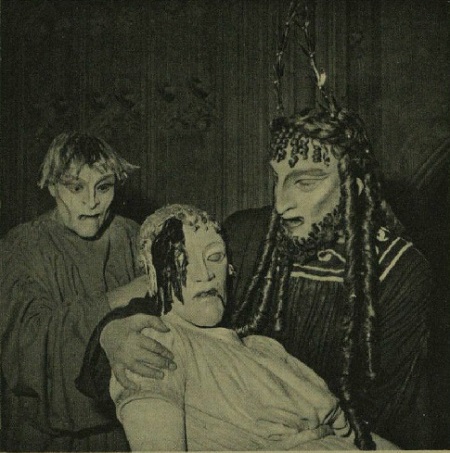