This is an edited version of an essay by William Hazlitt, published in 1821. I’m posting it partly because Hazlitt is such a beautiful writer, partly because its truths are still worth hearing, and partly for entirely personal reasons. Alwyn Turner.

It is better to be able neither to read nor write than to be able to do nothing else.

Learning is, in too many cases, but a foil to common sense; a substitute for true knowledge. Books are less often made use of as spectacles to look at nature with, than as blinds to keep out its strong light and shifting scenery from weak eyes and indolent dispositions. The book-worm wraps himself up in his web of verbal generalities, and sees only the glimmering shadows of things reflected from the minds of others.

Nature puts him out. The impressions of real objects, stripped of the disguises of words and voluminous roundabout descriptions, are blows that stagger him; their variety distracts, their rapidity exhausts him; and he turns from the bustle, the noise, and glare, and whirling motion of the world about him (which he has not an eye to follow in its fantastic changes, nor an understanding to reduce to fixed principles), to the quiet monotony of the dead languages, and the less startling and more intelligible combinations of the letters of the alphabet.

‘Leave me to my repose,’ is the motto of the sleeping and the dead. You might as well ask the paralytic to leap from his chair and throw away his crutch, or, without a miracle, to ‘take up his bed and walk,’ as expect the learned reader to throw down his book and think for himself. He clings to it for his intellectual support; and his dread of being left to himself is like the horror of a vacuum. He can only breathe a learned atmosphere, as other men breathe common air. He is a borrower of sense. He has no ideas of his own, and must live on those of other people.

The habit of supplying our ideas from foreign sources ‘enfeebles all internal strength of thought,’ as a course of dram-drinking destroys the tone of the stomach. The faculties of the mind, when not exerted, or when cramped by custom and authority, become listless, torpid, and unfit for the purposes of thought or action. Can we wonder at the languor and lassitude which is thus produced by a life of learned sloth and ignorance; by poring over lines and syllables that excite little more idea or interest than if they were the characters of an unknown tongue, till the eye closes on vacancy, and the book drops from the feeble hand!

The learned author differs from the learned student in this, that the one transcribes what the other reads. The learned are mere literary drudges. If you set them upon original composition, their heads turn, they don’t know where they are. The indefatigable readers of books are like the everlasting copiers of pictures, who, when they attempt to do anything of their own, find they want an eye quick enough, a hand steady enough, and colours bright enough, to trace the living forms of nature.

Anyone who has passed through the regular gradations of a classical education, and is not made a fool by it, may consider himself as having had a very narrow escape. It is an old remark, that boys who shine at school do not make the greatest figure when they grow up and come out into the world. The things, in fact, which a boy is set to learn at school, and on which his success depends, are things which do not require the exercise either of the highest or the most useful faculties of the mind. Memory (and that of the lowest kind) is the chief faculty called into play in conning over and repeating lessons by rote in grammar, in languages, in geography, arithmetic, etc., so that he who has the most of this technical memory, with the least turn for other things, which have a stronger and more natural claim upon his childish attention, will make the most forward school-boy.

A lad with a sickly constitution and no very active mind, who can just retain what is pointed out to him, and has neither sagacity to distinguish nor spirit to enjoy for himself, will generally be at the head of his form. An idler at school, on the other hand, is one who has high health and spirits, who has the free use of his limbs, with all his wits about him, who feels the circulation of his blood and the motion of his heart, who is ready to laugh and cry in a breath, and who had rather chase a ball or a butterfly, feel the open air in his face, look at the fields or the sky, follow a winding path, or enter with eagerness into all the little conflicts and interests of his acquaintances and friends, than doze over a musty spelling-book, repeat barbarous distichs after his master, sit so many hours pinioned to a writing-desk, and receive his reward for the loss of time and pleasure in paltry prize-medals at Christmas and Midsummer.

There is indeed a degree of stupidity which prevents children from learning the usual lessons, or ever arriving at these puny academic honours. But what passes for stupidity is much oftener a want of interest, of a sufficient motive to fix the attention and force a reluctant application to the dry and unmeaning pursuits of school-learning. The best capacities are as much above this drudgery as the dullest are beneath it. Our men of the greatest genius have not been most distinguished for their acquirements at school or at the university.

A mediocrity of talent, with a certain slenderness of moral constitution, is the soil that produces the most brilliant specimens of successful prize-essayists and Greek epigrammatists. It should not be forgotten that the least respectable character among modern politicians was the cleverest boy at Eton.

Learning is the knowledge of that which none but the learned know. He is the most learned man who knows the most of what is farthest removed from common life and actual observation, that is of the least practical utility, and least liable to be brought to the test of experience, and that, having been handed down through the greatest number of intermediate stages, is the most full of uncertainty, difficulties, and contradictions. It is seeing with the eyes of others, hearing with their ears, and pinning our faith on their understandings.

The learned man prides himself in the knowledge of names and dates, not of men or things. He thinks and cares nothing about his next-door neighbours, but he is deeply read in the tribes and castes of the Hindoos and Calmue Tartars. He can hardly find his way into the next street, though he is acquainted with the exact dimensions of Constantinople and Pekin. He does not know whether his oldest acquaintance is a knave or a fool, but he can pronounce a pompous lecture on all the principal characters in history. He cannot tell whether an object is black or white, round or square, and yet he is a professed master of the laws of optics and the rules of perspective.

He knows as much of what he talks about as a blind man does of colours. He cannot give a satisfactory answer to the plainest question, nor is he ever in the right in any one of his opinions upon any one matter of fact that really comes before him, and yet he gives himself out for an infallible judge on all these points, of which it is impossible that he or any other person living should know anything but by conjecture. He is expert in all the dead and in most of the living languages; but he can neither speak his own fluently, nor write it correctly.

A mere scholar, who knows nothing but books, must be ignorant even of them. ‘Books do not teach the use of books.’ How should he know anything of a work who knows nothing of the subject of it? The learned pedant is conversant with books only as they are made of other books, and those again of others, without end. He parrots those who have parroted others. He can translate the same word into ten different languages, but he knows nothing of the thing which it means in any one of them.

He stuffs his head with authorities built on authorities, with quotations quoted from quotations, while he locks up his senses, his understanding, and his heart. He is unacquainted with the maxims and manners of the world; he is to seek in the characters of individuals. He sees no beauty in the face of nature or of art. To him ‘the mighty world of eye and ear’ is hid; and ‘knowledge,’ except at one entrance, ‘quite shut out.’ 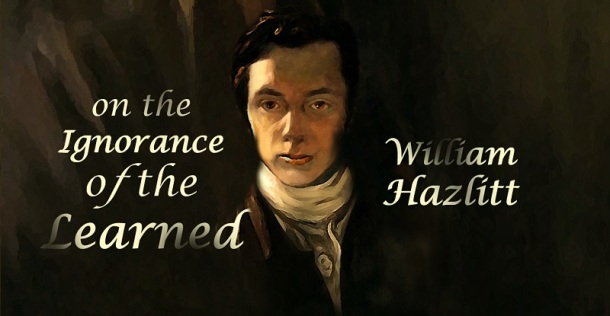 His pride takes part with his ignorance; and his self-importance rises with the number of things of which he does not know the value, and which he therefore despises as unworthy of his notice.

He knows nothing of pictures. The language of nature, or of art (which is another nature), is one that he does not understand. He repeats indeed the names of Apelles and Phidias, because they are to be found in classic authors, and boasts of their works as prodigies, because they no longer exist; or when he sees the finest remains of Grecian art actually before him in the Elgin Marbles, takes no other interest in them than as they lead to a learned dispute, and (which is the same thing) a quarrel about the meaning of a Greek particle.

He is equally ignorant of music; he ‘knows no touch of it,’ from the strains of the all-accomplished Mozart to the shepherd’s pipe upon the mountain. His ears are nailed to his books; and deadened with the sound of the Greek and Latin tongues, and the din and smithery of school-learning. Does he know anything more of poetry? He knows the number of feet in a verse, and of acts in a play; but of the soul or spirit he knows nothing. He can turn a Greek ode into English, or a Latin epigram into Greek verse; but whether either is worth the trouble he leaves to the critics.

Does he understand ‘the act and practique part of life’ better than ‘the theorique’? No. He knows no liberal or mechanic art, no trade or occupation, no game of skill or chance. Learning ‘has no skill in surgery,’ in agriculture, in building, in working in wood or in iron; it cannot make any instrument of labour, or use it when made; it cannot handle the plough or the spade, or the chisel or the hammer; it knows nothing of hunting or hawking, fishing or shooting, of horses or dogs, of fencing or dancing, or cudgel-playing, or bowls, or cards, or tennis, or anything else. The learned professor of all arts and sciences cannot reduce any one of them to practice, though he may contribute an account of them to an Encyclopaedia.

It does not require more than this to enable the learned candidate to arrive, by painful study, at a doctor’s degree, and to eat, drink, and sleep the rest of his life!