‘As a child I had to wait until my father had finished his services before I could open my presents. It felt like a very long wait.’ – On childhood Christmases, 2016

‘I have to confess when me and my friends used to run through the fields of wheat, the farmers weren’t too pleased about that.’ – 2017

‘I was not allowed to do any overt political activity when I was at home. My father felt it was wrong for a clergyman to show any party allegiance.’ – 2016

‘I thought I’d rather not face the trauma of men at breakfast.’ – On choosing a single-sex college at Oxford, 2002 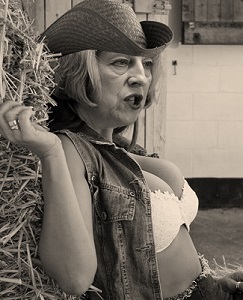 ‘You know what some people call us: the nasty party.’ – At the Tory conference, 2002

‘I have had calls from people who want to book me for programmes that are not perhaps about politics.’ – On being mistaken for Teresa May, 2002

‘Perhaps the chancellor would describe his relationship with the prime minister as the White Stripes track “Every Day I Love You Less And Less”.’ – On Gordon Brown and Tony Blair, 2006 (The song was actually by the Kaiser Chiefs)

‘We are seeing a government that is in its last dying throes.’ – On Gordon Brown’s government, 2009

‘Let me be clear. You need to speak English to learn at our education establishments. If you can’t, we won’t give you a visa.’ – 2011

‘To those who say the judges were too tough, I say the guilty should get what they deserve.’ – On the sentencing of rioters, 2011

‘Let’s stop pretending the police are being picked on.’ – To the Police Federation, 2012

‘We must – and will – resist calls for the mandatory relocation or resettlement of migrants across Europe. Such an approach would only strengthen the incentives for criminal gangs to keep plying their evil trade.’ – 2015

‘If we want to control immigration – and bring it down to the tens of thousands – we must take some big decisions, face down powerful interests and reinstate the original principle underlying free movement within the EU.’ – 2015

‘My pitch is very simple. I’m Theresa May and I think I’m the best person to be prime minister of this country.’ – Announcing her candidature for the Tory leadership, 2016

‘The government I lead will be driven not by the interests of the privileged few but by yours. We will do everything we can to give you more control over your lives.’ – As she became prime minister, 2016

‘I want a country where your background does not define your future and class distinctions are a thing of the past.’ – 2018

‘I want to help make us a country where no-one feels the need to hide who they are or who they love.’ – 2018

‘Nobody should have to sleep rough and that’s why we must do all we can to help the most vulnerable in our society get the support they need.’ – 2018

‘I’ve always said that a woman should be able to choose how she dresses.’ – 2017

‘I used to own a share in a race horse called Dome Patrol. We won one race, at Wolverhampton.’ – 2016

‘There is an immediate need for political certainty and economic confidence following the referendum. So that means no second referendum and no general election before 2020.’ – 2016

‘The country is coming together, but Westminster is not.’ – As she called a general election, 2017

‘Brexit means Brexit, and we’re going to make a success of it.’ – To the Tory conference, 2016

‘These terms that have been identified – hard Brexit, soft Brexit, black Brexit, white Brexit, grey Brexit. Actually, I think what we should be looking for is a red, white and blue Brexit.’ – 2016

‘There has been much jocularity around the term “Brexit means Brexit” but it does mean Brexit.’ – 2018

‘Don’t let anyone here think that there is a better deal to be won by shouting louder.’ – 2018

‘If standing up for what you believe to be right is being “bloody difficult”, then so be it.’ – 2016