In the ever-lengthening list of UKIP leaders, Baron Pearson of Rannoch was far from the worst. Nor, however, was he much good. He spent just ten months in the job, during which time he oversaw the disappointing general election result of 2010, when the average vote for a UKIP candidate fell below that for the BNP. Perhaps, though, he’d already made his contribution to the party, even before joining, by providing it with a mission statement.

He’d originally been a Conservative – he got his peerage from Margaret Thatcher – but had felt frustrated by its mealy-mouthed espousal of Euroscepticism. He was still a Tory when, during the 2004 campaign for the European Parliament elections, he called for people to vote UKIP. ‘The only party which might save our democracy, our right to govern ourselves, from the corrupt octopus in Brussels is the Conservatives,’ he said. ‘But the only people at the moment who can make the Conservative leadership see sense are UKIP.’

And so it has proved. The quixotic little venture founded in 1993 by historian Alan Sked has never amounted to very much as a party – two MPs in twenty-five years – but it has turned out to be the most effective pressure group in modern British politics.

As we’ve argued elsewhere, the decisive element in the 2016 referendum was the presence of Boris Johnson and Michael Gove on the Brexit side. But the fact that the referendum happened at all was entirely down to UKIP. And now Johnson is prime minister because of UKIP, leading a party whose defining policy is inherited from UKIP.

More precisely, of course, it’s not been UKIP itself that brought about these changes. It’s been Nigel Farage.

Back when Pearson was having the Conservative whip withdrawn, the UKIP leader was Roger Knapman (a former Tory MP), who wanted the party to be a serious, orthodox enterprise. ‘We have to be policy-based, not personality-based,’ he argued. He was wrong. It only worked when it was all based on personality – Farage’s personality.

He was the party’s first ever election candidate, its first representative on Question Time, and the first leader of any party to break the ninety-year Tory-Labour duopoly in a national election; under him, UKIP came second in the 2009 European election, with 16 per cent of the vote.

After Pearson’s ineffective interregnum, Farage returned as leader, and set about scaring David Cameron into the promise of a referendum. Then, in the 2014 Euro-election, UKIP came top of the poll, with over a quarter of the vote, some 4.4 million people. The numbers dropped slightly in the general election the following year, but UKIP did come third in the popular vote, even if they only got one MP. (Had seats matched vote-share, they would have had 82 members). 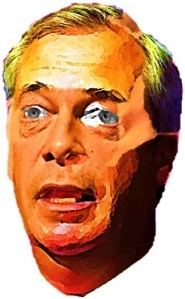 None of this was obvious, let alone inevitable. The party that Farage once described as ‘bumbling amateurs’ had no right to be this successful, this influential. The fact that it has been so is almost entirely down to the man himself – to his gift for communication, to his relentless campaigning stamina, and above all to his persona.

When Nick Clegg debated with Farage on the BBC in 2014, he accused the UKIP leader of wanting to take Britain back to the 1950s. Actually, Farage’s image was more that of a late-1970s rogue: enjoying a smoke and a drink (Scotch, we assume, not the beer of the photo-opportunities), bunking off work to go to the races, roaring with laughter at off-colour jokes, leaving no corner uncut when dealing with taxes and expenses. He gave the impression that, along with Arthur Daley in Minder, he had a seldom-paid tab at the Winchester Club.

And people who enjoyed Minder back in its original run tend to like Farage. On a personal level. It took his opponents a long time to understand (if they ever have) the fact that for many people Farage really was a very likable person. He was spoken of almost as one of the family, the latest of those mono-named right-wing figures who turn up occasionally in British politics, the plain-speaking tribunes of the people: Winston, Enoch, Maggie, and now Nigel.

Many on the left have been quick to point out that he’s a privately educated City trader, not a man of the people at all. But those who called him Nigel, rather than Farage, were never under the impression that he was a tiller of the soil. That wasn’t the point. It was the character that counted. He gave the impression that he enjoyed being alive, and the English have always preferred the cavalier to the puritan – as the general election has just shown.

The followers included former Labour voters. As Tony Benn recognized in 2004, UKIP was ‘appealing to the disillusioned working class’. Under Farage, this was the real growth area.

The identification of immigration as the issue on which to build popular Euroscepticism was crucial to UKIP’s rise, and later to the referendum result. It enabled Farage to take a Tory project into Labour’s heartlands in a way that an actual Conservative leader could never have managed, so great was the residual partisan hostility to the Tories.

And along the way Farage blew open a long rumbling fault-line in Labour’s support: the educated, socially liberal, metropolitan left versus an older ‘working class’ vote that was less likely to have been to university, and more likely to be found in small towns and on the fringes of Northern cities.

Labour has indulged in the conceit that it can win back the latter – the so-called ‘left behind’ – through offering old-fashioned socialist economics, while simultaneously embracing the cosmopolitan identity politics and internationalist foreign policy beloved of its new activists. But the election has confounded that (again).

And it was Farage who achieved this, not UKIP. His successor as leader was Paul Nuttall, who made a great deal of going after the working-class constituency, and who then saw the party’s vote in the 2017 general election fall to barely a sixth of that achieved two years earlier.

If there was any doubt over Farage’s significance, it was blown away this year. He abandoned UKIP, which took a nosedive into irrelevance (three leaders and three acting leaders in the last two years, all of them much worse than Baron Pearson of Rannoch). Instead he launched the Brexit Party in January, and within months was repeating his 2014 feat by winning the European election again. This time it was even more convincing: over 30 per cent, 5.2 million votes. You had to go back a quarter-century to find a party doing this well in a Euro-election.

Theresa May’s premiership was already doomed, but the Brexit Party’s victory finally put it out of our misery. And the decision to replace May with Boris Johnson was driven entirely by the need to negate Farage’s appeal. Boris wasn’t as convincing a character as Nigel, but he was the closest thing available. When it came to personality politics, Jeremy Hunt left the mustard uncut.

The tactic worked, and last month Farage was forced to concede defeat. Despite his successes in getting MEPs elected, there was no chance of progress at Westminster under first-past-the-post. The underlying truth of Lord Pearson’s analysis remained: only the Tories could deliver Brexit. And so, at the moment of decision, Farage withdrew half his candidates, to allow a Conservative victory in the general election.

It was a move born of a weak position, but it was also an honest recognition of reality by the most astute politician of his generation, a one-man pressure group who’s transformed the country more than any politician since Thatcher. It was also a complete success. Brexit Party candidates nibbled away at Labour votes sufficiently to let Johnson secure a huge majority.

Farage’s own future remains uncertain. When problems arise with Brexit, he will no doubt cry foul, arguing that the project’s not being pursued with appropriate vigour. But it’s doubtful that enough people will care sufficiently for him to make much impact. Few will want to fight these battles again. His success came by focusing a multiplicity of discontents onto a single target. Leaving the EU – however fudged the arrangements end up being – will probably be enough to make that impossible again.

There is, however, another struggle ahead, an attempt to reshape the constitution after the logjam of the last three years. The relationships of Parliament and government, and of politicians and electorate, the status of referendums, the role of the supreme court, the use of prerogative powers – all have been called into question since the referendum.

And Farage, with his unique powerbase outside Parliament, may have a crucial role to play in the coming debate on the nature of British democracy. It’s clearly in his sights: the second pledge on the Brexit Party election leaflet is: ‘Fundamental Democratic Reform: Let’s make Parliament serve the people.’ He’s been preparing the ground for the launch of another new enterprise, the Reform Party.

Or, alternatively, he might follow the example of Tory MP Steve Norris, who left Parliament in 1997 saying, with admirable honesty, that he wanted to spend more time with his money.

In the meantime – with the possibility in mind that he may have finally played his last political card – we’ll take this opportunity to name Nigel Farage as the Politician of the Decade (living).

Politician of the Decade (dead):

One thought on “Politician of the Decade (living)”