BEN FINLAY is your guide to the culinary pages of the UK underground press.

While studies of the late-1960s underground press have focused on its visual aspects, or on such weighty themes as politics, scant attention has been given to the coverage of food within the pages. And on first reckoning, cookery doesn’t seem an obvious component of countercultural journalism. However, a close study of the two original London-based underground papers, IT and OZ, reveals that food was among the maelstrom of ideas represented within the pages of the alternative press.

This took the form of occasional column space dedicated to macrobiotic diets, while vegetarianism was in evidence in several articles. IT would also include advertisements for Seed restaurant in London’s West End, and OZ published an article on food overproduction in the Western world. But the concern of this article is the recipes: ­the ‘Eat IT’ section in the early-1970s incarnation of IT, and the advice on how to cook on a budget in OZ.

This modest exploration reveals that the diets and food stuffs associated within the popular imagination as ‘hippy food’ (such as the ‘whole foods’ trend, yoghurt etc) were not in evidence in the flagship papers of the UK underground, at least in terms of recipes for cooking at home. Even when considering the shift in the counterculture after 1970 (when the near breathless change of pace and unified political fervour of the late Sixties turned towards ‘the self’), the attitude towards cookery was far from precious or taken too seriously by the British ‘scene’.

Instead the real incursion into healthier alternative food would emanate from the US. The Americans were, of course, far better at this stuff, and Jonathon Kaufmann’s book Hippie Food (2018) charts the rise of organic foods in the US from the early-1970s onwards. However, nowhere in Kaufmann’s work is there anything as ‘far out’ as IT’s recipe for ‘curried bananas’, a truly remarkable dish that contains the splendid culinary combination of carrots and banana – sadly, it never caught on.

So an exploration of the leading alternative papers should be more interesting, and this piece will attempt to delve into hitherto unassessed corners of the underground press to expose the domestic cookery of the hippy era, UK-style.

IT launched in October 1966, and OZ a few months later in January 1967, but neither gave any room to home cooking in their early editions, much too preoccupied with politics, revolution, sex and dope. However, OZ was first to put recipes into print, under the heading ‘Poverty Cooking’ in December 1968. As the title suggests, these were recipes on a budget, featuring several variations on the humble omelette and an unappetising dish called ‘Beggar’s Stew’ (the Rolling Stones released their album Beggars Banquet that month). The column appeared the following month, with a recipe for fried sprats and the delightfully titled ‘Ballsed-Up Bolognaise’.

‘Poverty Cooking’ reappeared a couple of issues later, with a recipe for ‘Roast Trafalgar Pigeon.’ All pretence to any sensible form of food writing had already given way to the papers irreverent humour, with readers living in close proximity to Trafalgar Square encouraged to entice said pigeon into a zip-up carrier bag containing bread, take it home, wring its neck, pluck and cook it. The ‘golden rule’ at the end stipulated that one should not ‘under any circumstances wring the neck anti-clockwise’. This would undoubtedly cause pandemonium these days, but then must have given way to some stoned laughter (or an epidemic of pigeon-disappearances from central London, but there’s nothing to suggest that happened).

In any case, the irreverence continued on in OZ 21 with ‘Leg of Long Pig’, a macabre recipe involving an overweight young school boy, which is far too horrific to explain on a family site like L&U (check the online archive if you like that sort of thing). The thread continued for another couple of issues, never quite living up to fake recipes of the cannibalistic nature, and by 1970 had vanished from the paper.

IT didn’t get there on the home cookery front until late 1969, in a column named ‘Foodage’. Aside from ‘Sadie’s Stewed Steak and Apricots’ and a passable junket, the column featured the aforementioned ‘Curried Bananas’ recipe (included here, should anyone wish to replicate such delights in the safety of their own kitchen).

Perhaps due to the unbridled hideousness of the dish, IT didn’t settle into any regular recipe column until its post urban-guerilla tabloid rebranding in early 1972. And maybe this was a good idea; the juxtaposition of communiques from the Angry Brigade alongside ‘How to cook Haricot Bean Curry for four’ might have diluted the revolutionary fervour a tad. In any case, the ‘Eat IT’ column (an obvious good name) started off a regular food feature from April 1972, befitting a paper that had settled into a sort of post-Sixties supplement for the latter days of the counterculture.

As with any strand in the underground press, it was subject to change at any moment; ‘Eat IT’ gave way to ‘Uncle Chuckle’s Pud Page’, which offered sound cookery tips alongside the occasional foray into counterculture proclivities such as ‘Soporific Teas’ – four variations on replacements for Mandrax. One has no idea if these worked at all, but the Apple Charlotte recipe they sit next to looks very good indeed. And then that was it in terms of recipes for IT. By 1973 the paper was facing financial difficulties, and the recipes page was dropped.

But the offshoots of the underground press, such as second-wave radical feminist paper Spare Rib, did continue with home cookery (at least for a while). The cookery writing in the early editions of that magazine reflects the changing times. Gone was the irreverent humour and sometimes primitive culinary skills; the new era saw a more earnest, healthy approach, attuned to a now established, less chaotic lifestyle. The September 1972 edition of Spare Rib saw advice on how to prepare a hamper for three days at a festival, something that would have been unthinkable on the pages of OZ just a few years earlier.

What is evident is that there’s not too much regard for cooking or eating. Food is considered an obvious necessity, but the near-fetishization we’ve got used to is nowhere to be seen. The recipes back then are devised for people on a budget, who presumably would spend their money on records or drugs, rather than on grub.

It also shows how food standards have changed since the early 1970s. It is worth remembering that this was within twenty years of rationing and Austerity, long before the era of the celebrity chef, let alone Deliveroo or uploading pictures of your dinner to Instagram.

And while considering this, there is a distinct lineage from the era. Although OZ and IT represented basic culinary delights within their pages, achievable for the possibly stoned novice at home, the example of individualism that these papers set trickled down to a new era. The original underground press papers folded in 1973, but their example of establishing one’s identity were continued.

As the 1960s generation came of age, alternative lifestyles would encompass a more considered approach to diet and cookery A consumerist approach to eating out would emerge, encouraged in successful spin-offs from the underground era such as Time Out, which sold more than any paper of the hippy era and moved the ‘outside’ to the mainstream. That’s not bad going, considering it all started with the curried bananas. 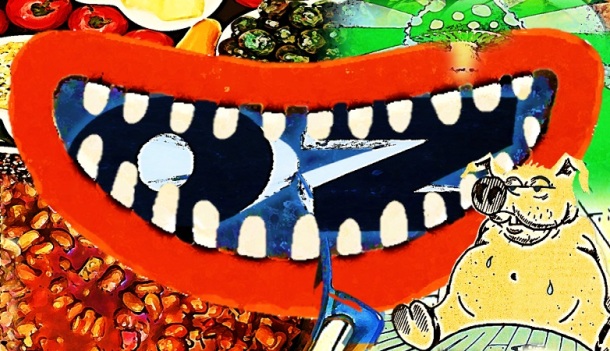 The onion and apple are chopped and the carrots scraped and left whole if they are really small. The vegetables are cooked slowly in the butter for 5 or 6 minutes and then put on a plate.

The flour, curry powder and lemon juice are stirred in and the stock is added gradually and brought to the boil. The vegetables are put into the sauce and simmered ’til the carrots are tender.

The bananas are cut in quarters and added five minutes before dishing up.

The curry is made as hot as possible and served in a border of boiled rice. 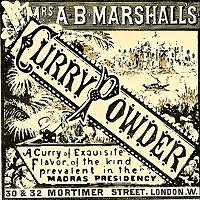