In January 2005 Princes William and Harry went to a party hosted by the children of Olympic gold-medal winning equestrian Richard Meade. It was a fancy-dress affair, with a theme of Native and Colonial, and William wore ‘a black patterned leotard accessorised with paws and a leopard’s tail’. Harry, on the other hand, who was then twenty years old and waiting to start officer-training at Sandhurst in May, went with a more controversial option: a uniform approximating to that of Germany’s wartime Afrika Korps, complete with swastika armband.

‘It was a poor choice of costume and I apologise,’ he said, when news of the party reached the media, but the swift apology did little to take the edge off the universally hostile coverage. 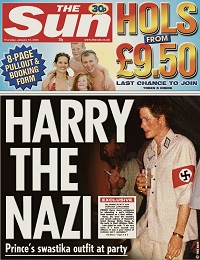 Headlines included ‘Harry the Nazi’, ‘Hitler youth’ and ‘Sieg Hal’, and the Sun columnist Lorraine Kelly was particularly vitriolic, not just about the swastika – ‘Harry’s trampled on the graves of Nazi victims,’ was the headline – but more broadly about ‘over-privileged, ghastly upper-class yobbos’ who ‘don’t give a toss about the rest of us as long as there’s wine in the cellar, plenty of furry creatures to take pot-shots at and dumb blonde Sloane Rangers to breed with.’

The story broke in the tabloids, but also received extensive coverage in those papers that had a political axe to grind: the Independent, which had ‘deep misgivings about the monarchy’, and the Guardian, which argued ‘for the disestablishment of the monarchy and the creation of a republic in this country’. The combination of royals and Nazis was a gift to republican columnists, even before the imperialist insensitivity of ‘natives and colonials’ was thrown into the mix.

It didn’t escape notice either that we were only a couple of weeks away from Holocaust Memorial Day, which this year marked the sixtieth anniversary of the liberation of Auschwitz in 1945.

On 27 January, the Queen and religious and political leaders joined six hundred survivors of the Holocaust for a solemn ceremony in Westminster Hall. It was a deeply moving occasion, accompanied throughout, in a quiet counterpoint to the official speeches and music and readings, by the voices of eight grandchildren of survivors reciting names of the dead, a whispered, endless litany of loss that made the most powerful impact of the day.

The memorial service provided a sharp contrast to Harry’s swastika armband, offering instead a reminder of how the royal family provided a sense of continuity with the past. In 1995, on the fiftieth anniversary of VE Day, the Queen Mother and her two daughters had stood on the balcony of Buckingham Palace, waving to the crowds, just as the same three women had done half-a-century earlier. Only one of that trio now survived, but again the echoes came down through the years.

In Westminster Hall on that Holocaust Memorial Day, Hannah Pick, an elderly Dutch woman, spoke of how her childhood friend, Anne Frank, had collected photographs of the young Princess Elizabeth, who was just three years older than her, and who enlisted in the Auxiliary Territorial Service the same month that Anne died in Bergen-Belsen.

The commemoration was also an opportunity for Tony Blair to speak for tolerance and decency and the need to fight racism. ‘We must pledge ourselves to confront such prejudice wherever it seeks to disfigure our community,’ he said. ‘And we remember above all that the Holocaust did not start with a concentration camp. It started with a brick through the shop window of a Jewish business, the desecration of a synagogue, the shout of racist abuse on the street.’

The next day, the Labour Party unveiled a new poster showing the faces of Michael Howard and Oliver Letwin – both of whom were Jewish – superimposed on flying pigs.

There was an immediate torrent of criticism from Jewish groups. ‘It is hard to believe it isn’t intended to cause controversy,’ said Rabbi Danny Rich, head of Liberal Judaism, though others gave Labour the benefit of the doubt. Maybe the party simply hadn’t recognized how provocative the association of Jews and pigs might look. Maybe it had forgotten that Howard and Letwin were Jews.

The defence wasn’t helped, however, by a second poster released that day which showed Howard looming out of a dark background, swinging a pocket-watch as he hypnotized the public; it was, said the Daily Mirror, ‘a Shylock-style pose’.

This was ‘sly antisemitism,’ protested the Tories, and many went further. ‘They knew what they were doing,’ thundered former Times editor William Rees-Mogg. ‘When they hint that the leader of the opposition resembles a Jewish villain, they must know the rest of us will take the hint, or at least to note that he is Jewish. Unfortunately, some voters are antisemites who will rise to the bait.’ And he laid the blame squarely at the prime minister’s door: ‘The last British politician to exploit antisemitism was Oswald Mosley; is it now Tony Blair?’ 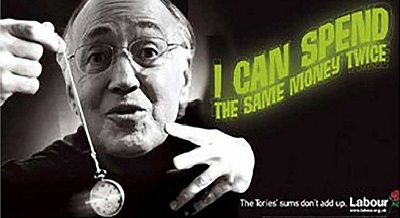 Previous incidents were recalled where the wrong impression might similarly have been given. There was Home Office minister Mike O’Brien a couple of weeks previously, writing in Muslim Weekly: ‘Ask yourself what will Michael Howard do for Muslims?’ he asked rhetorically. ‘Will his foreign policy aim to help Palestine?’

And then there was the time last year when Ian McCartney, chair of the Labour Party, had called Letwin a ‘21st century Fagin’. On that occasion, the Jewish actor Ron Moody, who played Fagin in the 1968 movie Oliver!, had been among the many who expressed his outrage. ‘I think it is disgraceful and irresponsible,’ he said. ‘Such a description is antisemitic.’

McCartney, though, had been bewildered. It was ‘absolute nonsense’ to say there was any racist intent, he’d declared, unable to conceive that any might think such things of him; ‘I have fought racism all my life.’

The hostility that greeted the posters, including from Jewish Labour MPs, ensured that they were withdrawn by the end of January, and weren’t used in the 2005 election, but doubts over Labour and antisemitism were not easily dismissed. 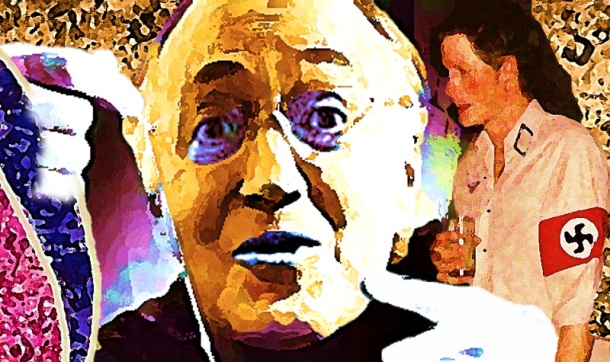