It was in the summer of 1845 that potato crops in Europe were first hit by a blight that had probably been imported from North America. Several countries were adversely affected, but none more so than Ireland where potatoes were a major part of the diet of humans and livestock alike: over a third of the Irish crop was lost that year, and worse was to come.

The resultant food shortages changed the history of these islands, leading to the Great Famine, the repeal of the Corn Laws, the splitting of the Tories and the creation of the Liberal Party.

As the crisis developed, one man attempted to offer a solution, only to find that a prophet is seldom without mockery in his own land.

Henry Howard, the 13th Duke of Norfolk, was a Whig MP, representing Horsham and then West Sussex, before his elevation to the Lords. He also served in various roles in the court of Queen Victoria, the kind of Gormenghastian jobs that presumably mean a great deal to their holders: Captain of the Yeoman of the Guard, Master of the Horse, Lord Steward of the Household. And, of course, he was the hereditary Earl Marshal of England (etiquette experts will know that this office ranks between the Lord High Constable and the Lord High Admiral).

Anyway, in December 1845, His Grace proposed his remedy to the problems of hunger and famine that were currently afflicting the nation: a mug of water and curry powder. ‘When a man came home and took this,’ he said, ‘it would make him warm at his stomach, and he could go to bed better and more comfortable.’

He was speaking at a meeting of the Arundel Agricultural Society, and his suggestion was met – clearly to his surprise – with gales of laughter. But really there was nothing to laugh at, he protested.

Curry powder, if it could be got, was as hot and as comforting as he had described it. The difficulty was to get it, and to persuade the poor that a pinch of the powder in warm water made a comfortable supper for a hungry agricultural labourer.

There was, of course, the question of taste, but one could soon become accustomed to it. ‘I like it very much myself,’ the noble speaker assured his listeners. ‘In India, a vast portion of the population use it; in fact, it is there to them what potatoes are in Ireland.’

It would be nice to think that the Duke was a satirist in the vein of Jonathan Swift, whose remedy for Irish hunger had been spelt out in A Modest Proposal (1729): the selling of poor children as meat for the wealthy. But there was no note of irony apparent in His Grace’s words, and the press reaction to the speech – ranging from outrage to sarcasm – suggested he was actually closer in spirit to the only famous saying attributed to Marie Antoinette.*

In that context, though, it was a bit of a come-down. Cake, even brioche, has considerably more appeal than the frankly unappetizing: ‘Let them drink curry-water.’

* Yes, I know it’s a misattribution, but the association with Marie Antoinette was just being established in the mid-1840s, so it seems appropriate here. 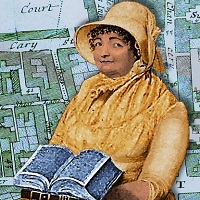 The Prophetess of Exeter